I’m thrilled to be able to share this audio file of my recent conference paper with you.

This recording is by no means the finished article but I have noticed that the subject really captures people’s attention so it felt right to share it. There is a lot more work and research to be done on the subject – especially concerning anxieties around the adulteration and cleanliness of fabrics.

In the meantime, I hope that you enjoy listening and I welcome any thoughts or ideas in the comments below.

Thanks to the wonderful Katrina Maitland-Brown for making this recording and to everyone at CHORD for the opportunity to speak at their workshop. As always, massive thanks to the team at Walsall Museum for their ongoing support.

Also see the ‘About’ section of the Wolsey website for their take on the brand’s history.

Several months ago, I (half-jokingly) mentioned my plans to write a paper about religion and underwear marketing. It was one of those situations where I knew there was something in the idea but it took me a while to get to the bottom of exactly what it was. After mulling the idea over and getting over the fits of giggles that struck me down every time I saw Cardinal Wolsey’s face on a pair of knickers, I decided to seriously pursue the idea.

I submitted an abstract for the Centre for the History of Retailing and Distribution workshop on retailing and the human body and was delighted when I was told that it had been successful. Since then I’ve become immersed in the world of early-twentieth century underwear, Thomas Wolsey and St. Margaret.

The CHORD workshop ‘Retailing, Commerce and the Human Body: Historical Approaches’ takes place on 14th May 2014 at University of Wolverhampton. Visit the CHORD webpage for more information.

I’ll publish a summary of my paper on here after the event, but for now I wanted to share some of the images I have gathered whilst researching the paper: 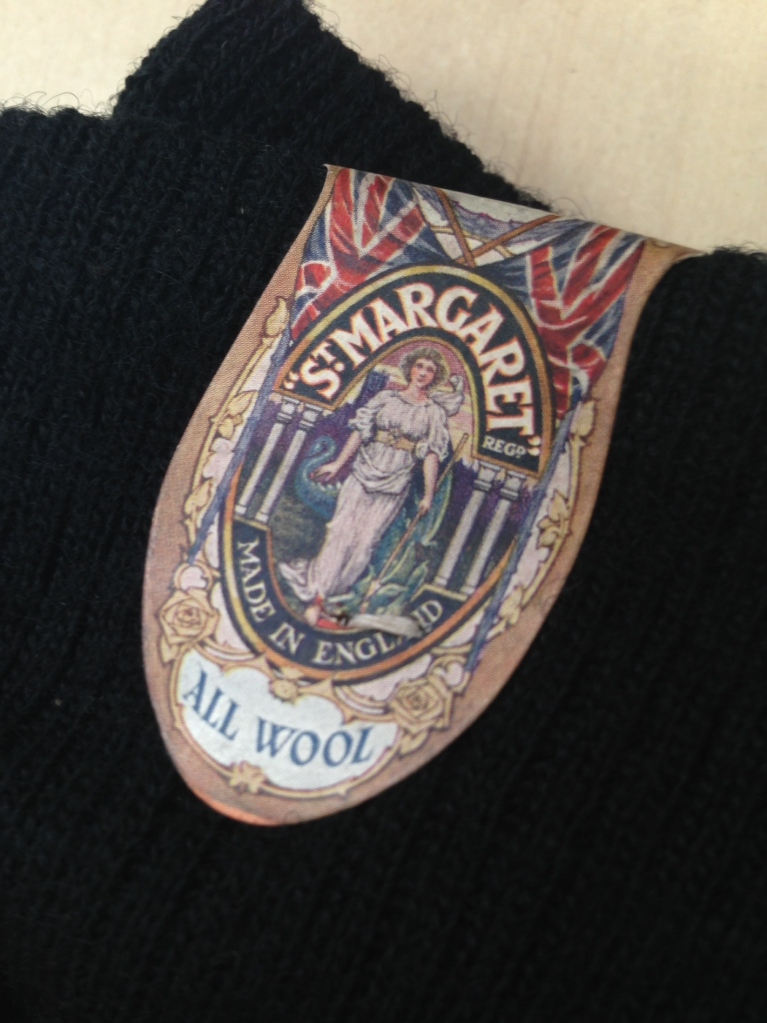 Box of Wolsey Artificial Silk Stockings from the 1920s

Boxes of St Margaret Silk Hose from the 1920s

As always, massive thanks to the team at Walsall Museum for allowing me to study and photograph these items!

After a busy few weeks (more on which in a future post), it has been a pleasure to finally get back to hands-on archival research. I’ve spent a few days digging through the Hodson Shop archive of trade catalogues, seeking out links to any of the items I have encountered during my object analysis.  Plenty have emerged as I’ve worked my way through piles of  trade brochures for Birmingham wholesalers such as Wilkinson and Riddell, S.C Larkin and Sons and Bell and Nicholson. The images below are of some of the things that have caught my eye. They aren’t always hugely relevant to my research but they are the things that have raised some intrigue, a smile or a giggle.

I’ve attempted to give as much detail as possible for each image, though I forgot to note the date and wholesaler for this Christmas apron image. I think it is late-1940s/early-1950s Bell and Nicholson, though I’ll double check when I am next at the museum and update the caption accordingly.

I’ve posted before about underwear and how the collection highlights changing attitudes and approaches to undergarments from 1920s-1960s. The 1920s Queen of Scots promotional material is a prime example of this: hygiene and comfort, alongside endorsement from a pious historical figure (c.f. Cardinal Wolsey and his stockings). This is something that I really want to do some more research into (proposed paper title: Piety, Purity and Pants). If  you know of any existing work on early-20th century underwear marketing, please let me know! 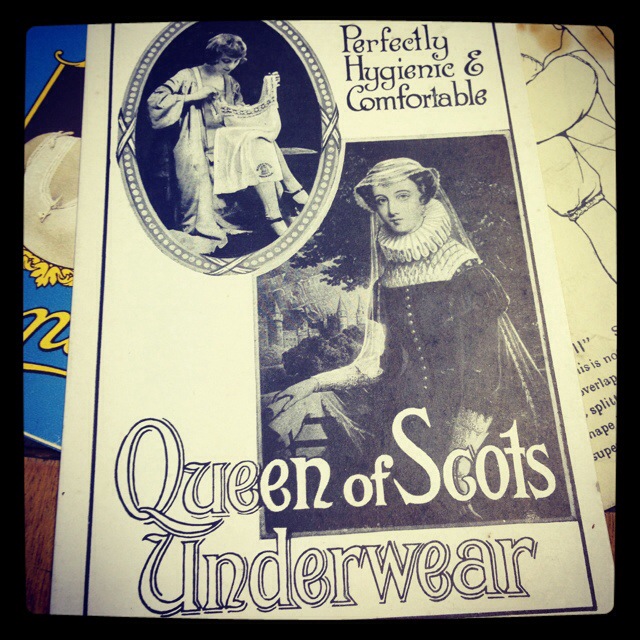 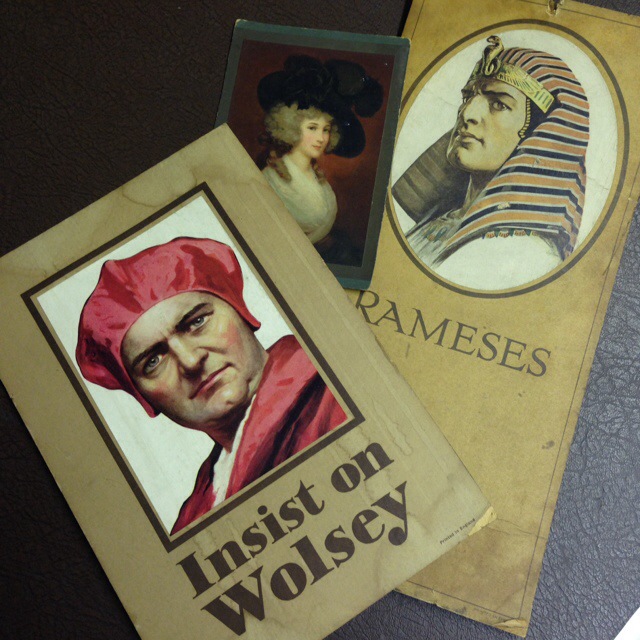 Display cards for Wolsey and Rameses hosiery and underwear.

The 1930s Wilkinson and Riddell catalogue covers are especially stunning – with their Japanese influences and bold artwork. There is something rather charming about their Greyhound logo, especially when placed next to a bonsai tree. The pink and yellow gladioli cover is a personal favourite.

The  S.C. Larkin and Sons brochure, New Designs for 1930. Maids’ and Nurses’ Caps, revealed links to Walsall’s famous Sister Dora – the nurse and nun who revolutionised approaches to nursing during the mid-ninteenth century. She created a simple cap for nurses to wear and the brochure shows the design in a number of styles ‘suitable for bobbed hair’.

The final image is of some scribbled notes that I found inside a 1954 Bell and Nicholson catalogue, possibly by Edith or Flora Hodson. There was something eerie about coming across these notes and doodles – as if they were a direct link back to the women and what was going on inside their heads. I’ve seen their handwriting many times before but it has mainly been scrawled numbers or scrappy receipts. These notes seem more personal. And that little sketch of a head? Well, I’m filing that under ‘a bit creepy’.

Assorted notes and doodles found in a Bell and Nicholson trade catalogue, 1954.

Many thanks to Walsall Museum for providing me with access to the archive and for allowing me to photograph the items.

If you wish to explore the Hodson Shop Collection and Archive, please contact Walsall Museum.

The Hodson Shop contains a lot of underwear and analysing it has been quite an eye opening experience! Let’s just say that there’s nothing like a pair of pale brown 1920s woollen knickers to make you eternally grateful for a humble pair of M&S cotton briefs.

The drab, frumpy and substantial (in both cut and fabric) nature of some of the underwear that I have been examining has highlighted one of the key dangers when using the collection to make generalisations about fashions and dress from particular eras. It is quite easy to look at items from, say, the 1920s and use them to create a vision of what people wore during that period. Yet caution is required.

Garments in the collection are there for a simple reason: no one ever purchased them. This could be a case of the Hodson sisters buying in far too many items and refusing to have stock clearance sales or it could be that they were simply stocking things that no one wanted.

Take this 1930s woollen combination (below). It is made by the fabulously named ‘Rameses’. The first thing I noticed was the sheer weight and thickness of the fabric, I then noticed the open crotch and I have to admit that that there were giggles. To 21st century eyes, the garment has an almost comic quality. It is a world away from the ‘sexy’ briefs and bras that stuff underwear drawers across the country.  In fact, it is a world away from ‘sexy’ fullstop! 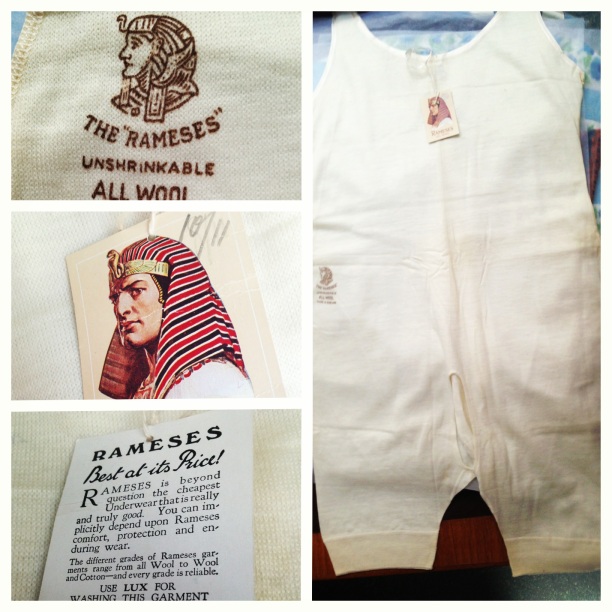 Forget Agent Provocateur or Coco de Mer, this is underwear that was intended to perform a function. The open crotch, for example, was there to enable the wearer use the toilet without having to get undressed. That’s not to say that the wearers of such garments didn’t get frisky when the urge so took them…

The Hodson Shop would have needed to cater for their older customer. So during the 1920s and 1930s when many of Willenhall’s young ladies would have been donning shorter skirts, some Hodson Shop customers were possibly still sporting Edwardian-era ankle length skirts. In that context, a knee length woollen combination with a split crotch begins to make something resembling sense.

These are items that were out of fashion even at the point of potential sale. They make regular appearances throughout the collection as the customers who would have worn them were dying out or adapting to new styles of underwear.

There is a general trend emerging through the collection of undergarments becoming smaller (and often prettier) as time progresses. A Utility bra is made in a delicate shade of rose, with ribbon straps; a 1950s slip has chiffon flounces printed with trailing flowers (see above). I am also beginning to notice a shift in the promotional text used on swing tickets and labels. Earlier garments are accompanied with copy that emphasises their value, durability and quality. Vests are ‘Unshrinkable’ and ‘Protective’ (see image of the ‘Rameses’ combination above). There is also an emphasis on the ‘purity’ of the fabrics used. I am yet to observe such text accompanying underwear from 1940s-50s. This possibly gives a few hints about how social attitudes towards women, dress and sexuality were changing.