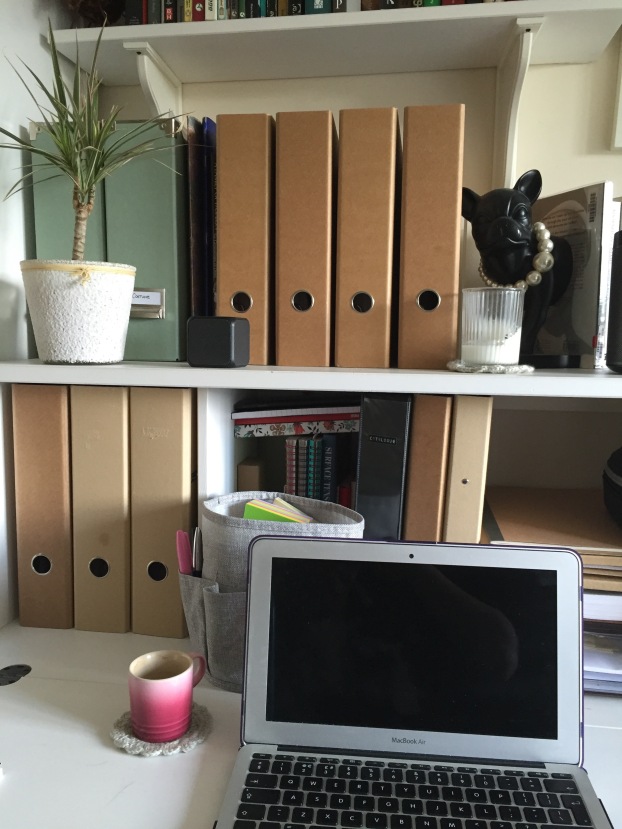 My desk. Going to be gazing upon this view a LOT over the coming months.

Three years ago, three years sounded like a very long time. There were even moments, early on, when I thought I’d get this thesis done in two and spend the last year kicking back on a beach, sipping cocktails and making hilarious jokes about being a doctor of fashion (‘Diagnosis: those shoes with those trousers, seriously?’). Turns out that writing a doctoral thesis is hard and takes way longer than you’d initially expect.

I’m now officially writing up. This means that I have done all of my research and now have a year to cobble together my findings and ideas into a coherent document, one with a contents page, cover and everything. I’ve been writing since day one, way back in October 2012. I like writing and a few people told me that it was best to write from the outset of the PhD project. I’m glad I did. Sure, some of the stuff I wrote back in the early days makes me cringe and scream ‘WHAT WERE YOU THINKING?’ (e.g. I went through a proper emo poetic phase circa. Jan 2014 when I kept trying to sneak Giacomo Leopardi quotes into a chapter. Yeah, that didn’t really move anything forward and I fear my supervisor was beginning to despair but it felt really intellectual and meaningful at the time). It is satisfying to now look back through my work and observe my voice becoming clearer and stronger, my references become more elegant and my actual thesis emerge from what was once a chaotic jumble of convoluted theory and hunches.

That’s not to say the journey is over. I’ve still got a long way to go and I don’t think any academic researcher ever stands still. We are constantly learning something new, changing and developing. That’s what makes the prospect of my future career so exciting. I want to keep learning new stuff and talking to people and reading ideas and seeing things and changing things for as long as I’m on this earth (maybe that emo poetic phase isn’t quite over).

This blog has never been a place for sharing my core findings, rather somewhere to put the interesting asides or to share good or bad news. It feels right to now share something very simple that the past three years have taught me. It is something that I’d long suspected and Meryl Streep’s character in the Devil Wears Prada has eloquently expressed: clothes matter. Victoria Kelley has identified how, in the binary of surface/depth, depth is considered to hold the real value and interest. Surface often gets dismissed as somehow trivial.[1] We live in a world where interest in surface is considered a negative trait. Binaries and violent hierarchies are all well and good and I firmly believe we watch many of them play out in the world on a daily basis (ahem, Twitter). Yet I’ve come to realize that they are too neat and tidy, too black and white and way too bound up with power to be the only means by which to understand what is going on in the world around us.

My research has found that the Hodson Shop Collection has been on the subservient side of a number of binary oppositions: worn/unworn, dirty/clean, ordinary/spectacular. Yet the nature of these pairings functions differently in the museum space than in the outside world and the perceptions of the dominant/subservient relationship shifts according to who is beholding the garment or collection. A dress historian might view a dirty smudge as exciting ‘evidence’ whilst a museum visitor could consider it as off-putting. An unworn dress could be considered to lack tangible evidence of daily life for a social historian whilst it would look visually attractive on a mannequin and potentially present fewer conservation issues for a museum professional. Binaries shift and crack and that’s where the shades of grey emerge. I’ve discovered that it is these nuances that excite me.

The collection has also been subject to a host of influences beyond the surface of each garment. I’ve found that the story of the collection is one of politics, economics, emotion, gender and power. It hasn’t been a simple story of individuals determining the future lives of objects; the objects have also shaped the lives of individuals. Stuff matters and stuff can change people’s lives. The story of a dress (or, in the case of my research: 5,208 items of mass produced clothing and accessories) is entwined with that of the world and people around it. And that story doesn’t end when the dress enters the museum. Museums and museum stores are not static or sacred.

These are just a few semi-formed ideas that have been floating around in my head over the past week. Nothing earth shattering, refined or complete. The earth shattering (HA!) refined and complete stuff will happen over the course of the next few months. In the meantime, thanks for reading.